Ibrahimovic : I Am Happy Playing For FC Barcelona 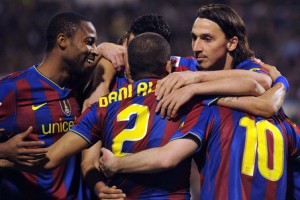 Barcelona striker Zlatan Ibrahimovic has revealed that he is happy at that Spanish club.

The Sweden international was back on the scoresheet last night, converting a penalty in the victory over Real Zaragoza. This came after his benching for the Champions League victory over Stuttgart, which led to his agent hitting out at coach Pep Guardiola and his teammates.

Ibrahimovic told reporters after the game that : “I’m emotionally well because I played well, I worked hard. But when the ball doesn’t fall your way, it doesn’t fall you way …”

Lionel Messi passed the spotkick onto Ibra, who added: “Yes, Leo gave me the ball and I thanked him.”

On last week’s controversy, Ibra said: “I was enraged because a player always wants to play, but I’m not sad.

“The coach hasn’t told me why I was dropped, but he doesn’t owe me an explanation.”