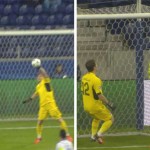 A blunder by Iker Casillas helped Dynamo Kiev seal a 2-0 win away to Porto in the Champions League which threw Group G wide open on Tuesday and left the hosts in danger of missing out on the knockout stage.

Andriy Yarmolenko put the Ukrainian champions ahead with a first-half penalty before the former Real Madrid goalkeeper completely misjudged a weak Derlis Gonzalez shot in the 64th minute.

The Paraguayan forward, under pressure and being forced wide by Giannelli Imbula, managed to get in a seemingly harmless shot which Casillas tried to punch away with one hand, only to see the ball loop into the air and land in the net.

Porto, previously unbeaten in all competitions this season, had needed only a draw to qualify with a game to spare but are now in danger of missing out as they visit Chelsea in their final game probably needing to win.