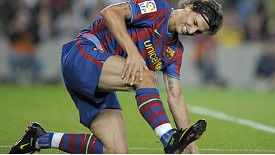 Bad news for all Barcelona fans as striker Zlatan Ibrahimovic could miss the club’s next match after suffering an ankle injury in his side’s 4-1 thrashing of Racing Sandater on Tuesday night.

Tests conducted on Ibrahimovic’s ankle confirmed that the former Inter Milan striker has suffered a grade I-II sprain to his right ankle and has been classed as ”a doubt” for Saturday’s league match against Malaga.

Zlatan went over on his right ankle in the second half against Racing and played on for several minutes before being replaced by substitute Pedro.

Prior to the injury, Ibrahimovic had scored one goal and created another for Gerard Pique with a clever backheel. His four goals in as many games have helped the defending champions to first place and a perfect record in La Liga.

Barcelona manager Pep Guardiola will be especially keen to have his marquee summer signing back for next Tuesday’s Champion League tie with Dynamo Kiev, after his side opened their European campaign with a draw away to Inter Milan.