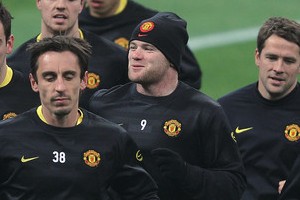 Wayne Rooney has not trained at Manchester United since Sunday’s win over Liverpool.

Local newspapers have reported that the striker may still be troubled by the knee problems which have been affecting him for nearly a month.

Rooney was limping heavily as he walked around the Old Trafford touchline an hour after Sunday’s match had finished and though he did not need medical treatment on Monday, he missed training sessions on Tuesday and yesterday and seems unlikely to play for United at Bolton on Saturday lunchtime.

England boss Fabio Capello is desperate for Rooney to be fit for this year’s World Cup.