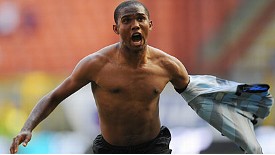 Samuel Eto’o scored a spectacular goal to set Inter Milan on their way to a 2-0 win over Parma on Sunday while AS Roma came from behind to beat Siena 2-1 in Claudio Ranieri’s first match in charge.

Eto’o broke down visitors Parma’s stubborn resistance when he curled in a right-footed shot in the 71st minute before Diego Milito wrapped up the win with a late strike to give the Serie A champions seven points from three games.

Inter Milan are two points behind Sampdoria, who maintained their perfect start with a 1-0 win at Atalanta despite Fernando Tissone’s red card, and Juventus, who won 2-0 at Lazio on Saturday.


Adebayor Could Be Slapped With A Six Match Ban