It has been reported that Inter Milan defender Matias Silvestre hopes to sign permanently with Sampdoria. 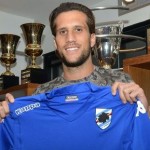 The 29 year old Argentine centre back is on-loan at Inter from Samp.

“It’s too early to talk about my future,” Silvestre has told the Corriere Mercantile.

“But Sampdoria wanted me very much, and my first impression of them was very positive, so I think there are grounds for us to move forward together.”

Sampdoria have matches against Sassuolo and Chievo before next week’s inter-city clash with Genoa, which Silvestre is already anticipating.

“We will play the derby to the fullest. I’ve quickly realised the importance of this game.”