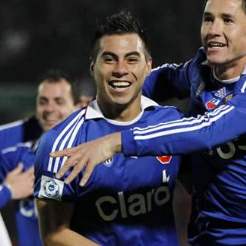 Reports have emerged that Inter Milan have made a desperate late attempt to trump Napoli for Universidad de Chile striker Eduardo Vargas.

The Chile international declared yesterday he was joining Napoli, though no contracts have yet been signed by the player nor his club.

It’s a long shot for Inter, but frantic negotiations were ongoing last night between Inter and the Chileans over a fee for Vargas.


Inter Milan Ready To Send Luc Castaignos Out On Loan