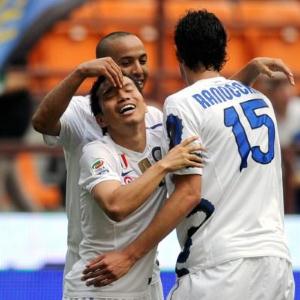 Giampaolo Pazzini scored twice as Inter Milan warmed up for the Coppa Italia final by beating Catania in their final Serie A match of the season.

Pazzini scored after 15 minutes and again three minutes into the second period, before Yuto Nagatomo added a third in the 63rd minute.

Pablo Ledesma pulled one back for Catania three minutes later but it was a deserved win for the hosts.

With Inter guaranteed to finish no higher or lower than second and with a cup final date against Palermo next week, Inter could have been forgiven for having their minds elsewhere.