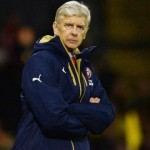 Following the club’s AGM in midweek, speculation surrounding Wenger’s long-term future at the club has resurfaced once again, with reports that he could quit the club once his contract expires in 2017.

“It’s difficult, for me, to see him leave Arsenal. I just don’t picture it,” said Henry on Sky Sports.

“But look at him. He’s as animated as ever,” he added. “The other day on the bench against United I think he rolled the years back.