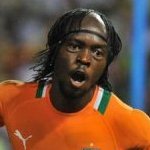 Ivory Coast will meet Zambia in the African Cup of Nations final on Sunday after a fine solo effort from Gervinho helped them to a 1-0 win over Mali in Libreville.

The Arsenal forward settled the semi-final moments before half-time as he carried the ball from his own half before curling a low effort beyond Mali goalkeeper Soumaila Diakite.

There were jubilant scenes at the final whistle and Ivory Coast will now contest their third African Cup of Nations final. It will be their first since 2006 when they lost on penalties to Egypt.