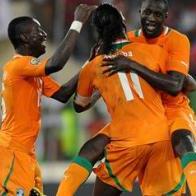 Ivory Coast made it through to the last four of the African Cup of Nations following a comfortable 3-0 victory over co-hosts Equatorial Guinea in Malabo.

Didier Drogba missed a penalty before capitalising on a Rui Da Gracia mistake to break and put the Elephants into the lead ten minutes before the interval.

The Chelsea man then got his second of the game and third of the tournament with a tremendous header before Yaya Toure’s free-kick made sure of victory with a little under ten minutes remaining.

Ivory Coast, the only side yet to concede in this year’s competition and the pre-tournament favourites, came into the match with the co-hosts Equatorial Guinea having made a sweeping nine changes for their final group game against Angola as they returned to full strength against the National Lightning, who were in the knockout stages at the first time of asking.