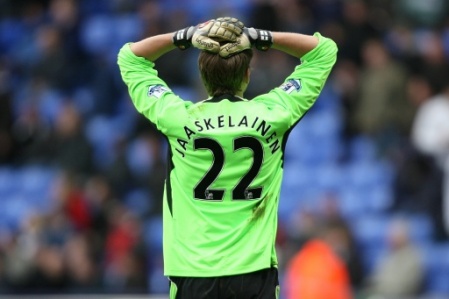 Bolton goalkeeper Jussi Jaaskelainen believes that Manchester City’s spending spree in the transfer window does not necessarily guarantee them success.

Manchester City who is Bolton’s closest neighbours have been the Premier League’s big spenders this summer, signing the likes of Gareth Barry, Carlos Tevez, Emmanuel Adebayor and Roque Santa Cruz for close on £100million as they seek to break into the top four.

Bolton’s transfer budget, by comparison, pales into insignificance with manager Gary Megson working within certain financial restraints and Jaaskelainen admits he is interested to see what difference it will make in competing with the established status quo of Manchester United, Liverpool, Chelsea and Arsenal.

The Finlnd international goalkeeper told reporters that it is a good thing for the Premier League and if people want to come and invest money good luck to them.

The player added that money does not always bring success and that this can be seen from the top four who has been there for a long time, having built up to it for a number of years, and therefore it is going to be interesting.