Reports are out claiming that Swansea City midfielder Jack Cork insists they can pull off upsets against Tottenham and Arsenal. 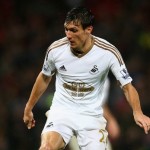 Their next two fixtures are daunting trips to White Hart Lane and the Emirates.

“They’re games that we’re not really expected to get anything from,” said Cork.

“But Sunderland beat Manchester United on Saturday and it has been the sort of season where anything can happen.

“No-one would have expected Leicester to be at the top or Chelsea to be further down. I know we’re down the bottom, but no-one is expecting us to win so maybe we can go there and get something.

“We beat Arsenal twice last season and it would be good to get a result against Tottenham because I know we haven’t really done that yet.”