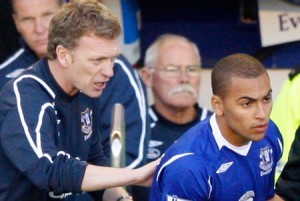 Vaughan, age 21, has played only eight minutes of football for the Toffees this season and finds himself behind Jo, Louis Saha and Yakubu in Moyes’ plans at Goodison Park at present.

After becoming the youngest ever Premier League goalscorer when making his debut in 2005, a serious run of injuries has restricted the striker to only eight starts in the competition and Moyes is ready to send him out on loan for some valuable first-team football.

It has been reported that Middlesbrough have been watching the England Under-21 international and it appears as though a temporary move to The Riverside could soon become a reality.

Moyes told the club’s official website that “We think it would benefit him to get some games under his belt,”

Moyes also said in the statement that “We have not been able to do that for the boy and he has missed a lot of football, so we wouldn’t be opposed to it.”