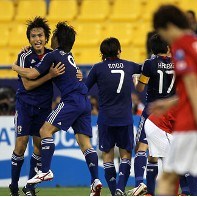 Neither side were able to add a second before the end of 90 minutes, taking the game to extra time. Hajime Hosogai’s 97th-minute goal put the Japanese ahead only for Hwang Jae-won to strike with seconds remaining to force penalties.

Keisuke Honda, Shinji Okazaki and Yasuyuki Konno all scored from their spot-kicks while South Korea failed to convert theirs to send Japan through to the final.