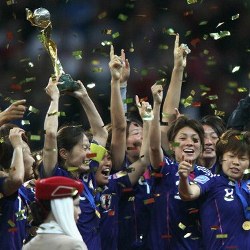 A persistent Japan twice came from behind before beating USA 3-1 on penalties to win the Women’s World Cup in Frankfurt.

The exhilarating final was eventually won by a dogged Japan team that recovered from a goal deficit on two occasions, to draw 2-2 after extra time, before holding their nerve from the spot.

Goals from Alex Morgan and Abby Wambach put the US ahead but Japan’s outstanding players Aya Miyama and captain Homare Sawa levelled things up.