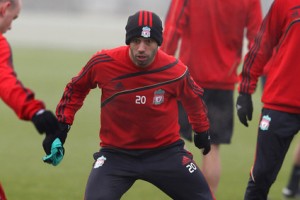 Good news for all Liverpool fans as manager Rafael Benitez has confirmed that midfielder Javier Mascherano is close to agreeing a new deal at the club.

The Argentina captain admitted that the deal was now in the hands of the club and with Benitez commenting that talks are ongoing, it looks likely that a deal will be sorted.

Benitez reportedly told reporters that : “We were talking, progressing and we’re closer now. Still we need to talk a little bit but we are closer,”

Benitez also added that : “It would be very important for the club. We have some important players with some years left on their contracts and this could be another one. It’s very important that we’re keeping the spine of the team.

“Every fan knows he’s a very important player for us, a key player who’s good for team spirit. He’s an example for a lot of players.

“He shows every game his commitment, desire and passion. He has great character, but he can also play. He’s a player every manager would like to have in their team.”