Jens Lehmann Wants To Retire At The End Of The Season 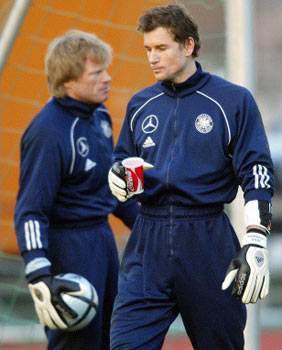 Former Germany international goalkeeper Jens Lehmann, who will turn 40 in November, has decided to end his distinguished career at the end of the season.

Lehmann, who also enjoyed success with Arsenal from 2003 to 2008 before returning to Germany to play for Stuttgart, said he wanted to see one last year of Champions League action with his current club before retiring.

Lehmann told reporters before Stuttgart’s 2-0 win against FC Timisoara for the Champions League qualification play-off that he will play until the end of the season and then that is it. He also added that it will be good to move out of the spotlight for a bit.

Lehmann won 61 caps for Germany starting in 1998 and played his last match in his country’s 1-0 defeat against Spain in the Euro 2008 final.

Explosive and often controversial, Lehmann would have won many more caps had it not been for rival keeper Oliver Kahn, who dominated in the national team for much of that period.

Lehmann was the first choice goalkeeper for Germany at the 2006 World Cup, helping the hosts reach third place, after saving two penalties against Argentina in the quarter-finals, as well as the Euro 2008.

Outstanding for much of his time at Arsenal, he will always be remembered as the first keeper to be red carded in a Champions League final, for a foul on striker Samuel Eto’o in the 18th minute of the 2006 final defeat against Barcelona.