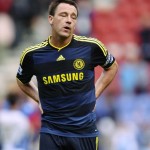 John Terry has let rip at his Chelsea team-mates for their lack of fight and desire in Saturday’s defeat at Wigan.

Blues skipper Terry blasted that the least is expected from every player is that they work hard and fight and the players did not do that.

He also added that the players did not win headers and did not win the tackles and that is simply not good enough.

Terry also said that the team can go anywhere and not play well but when the team come to places like this, it better be ready to match their work-rate. Terry added that Chelsea did not do that and that is very disappointing.

Blues were knocked off top spot by title rivals Manchester United after surrendering their 100 per cent start and Terry added that all the other big sides had emphatic wins and that makes it even more disappointing that Chelsea have thrown away three points.

Saturday’s 3-1 defeat piles on the pressure for Sunday’s Premier League showdown at home to Liverpool.

Keeper Petr Cech misses that game as he is banned for his red card at Wigan and whereas defender Ashley Cole and midfielder John Obi Mikel both suffered injuries that make them doubts.

Mikel left Wigan with an ankle injury while Cole will have a knee scan.

Nani Look To Ronaldo For Inspiration