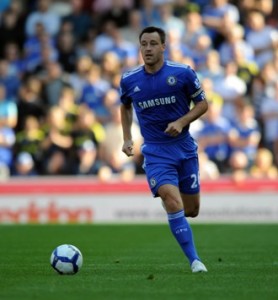 England and Chelsea captain John Terry has accused the Premier League of taking the ‘easy way out’ with their new rules on homegrown players.

From next season, the new rules requires all the Premier League clubs to have eight homegrown players, trained for three years under the age of 21 in England or Wales, out of a squad of 25. However John Terry does not believe that the regulations will impact too much on top-flight clubs.

Terry believes that the only way to ensure that homegrown youngsters emerge is to introduce limits pertaining to the starting XI, while he has also called on players to take responsibility for their own careers.

Terry told reporters recently that the teams can all put eight players in a squad of 25 but it does not necessarily mean that these players are going to be in the team and therefore it is still a problem.

Terry added that when he was coming through the youth ranks, he was always got told that if he was good enough he would get the chance, so it is up to individual players to work hard and prove that they deserve a place in the team.

Terry also added that he thinks that this is an easy way out because anybody can put eight homegrown players in a squad of 25.

John Terry also said that until there is a rule that there has to be homegrown players in the starting XI, he does not think much is going to change because teams can still have 11 foreign players in the team.

Terry ended by saying that there will not be a bid difference and he thinks that it is going to be very much the same.

Ronaldinho To Be Benched Again