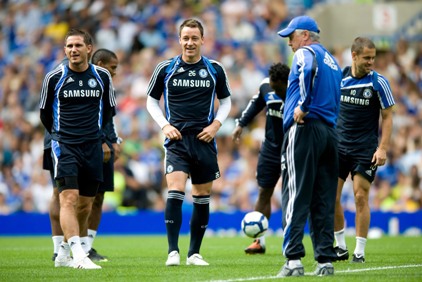 Latest Premier League news are out and it has been reported that Chelsea captain John Terry has signed a new five-year contract that will keep him at Stamford Bridge until 2014.

The 28-year-old England international defender, Chelsea’s most successful captain, has been at the club since the age of 14 and Chelsea hopes that the new deal, reported to be worth £150,000 per week, will see Terry finish his career in west London.

Chelsea released a statement saying that the club is delighted to confirm that John Terry has signed a new five-year contract that keeps him at the club until the end of the 2013-14 season and that this new contract reaffirms both John’s and Chelsea’s long-stated desire for him to be at Stamford Bridge for the rest of his playing career.

Terry, also known as ‘Mr Chelsea’ because of his long service and prominence at the club, attracted strong interest from cash rich Manchester City earlier this summer.

With two years left on his previous contract, he was the subject of a bid from Eastlands reported to be in the region of £50million but opted to stay with the Blues.

After a period of silence which fueled speculation he might leave the capital, Terry publicly declared his loyalty to Chelsea late last month.

John Terry has so far made 276 appearances in 12 seasons at Stamford Bridge and has won 54 England caps since 2003.