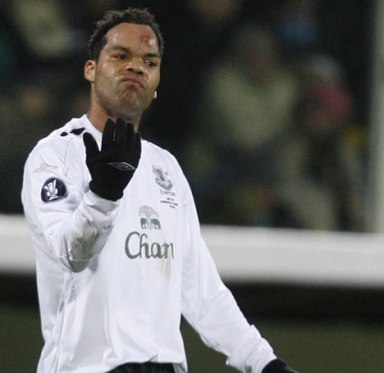 Everton defender Joleon Lescott is reportedly training away from the first-team squad as he tries to force through a move to cash rich Manchester City.

The England international defender handed in a written transfer request to Everton last week, after City had offers of £15m and £19m rejected by the club.

The Eastlands club have yet to formalise a third bid, but Lescott has made it clear that he would be keen to move, despite manager David Moyes labelling City’s attempts to lure the player away from Merseyside as ”disgusting”.

However it is now believed that former Everton defender Richard Dunne could be offered in part-exchange and the Toffees are believed to be ready to sell if City return with a bid upwards of £22m.

Lescott’s performance in the 6-1 defeat to Arsenal on the opening day of the Premier League season came under intense scrutiny, with many pointing the finger at the disillusioned defender and he now looks set to be left out of the squad for the club’s Europa League game with Sigma Olomouc on Thursday.