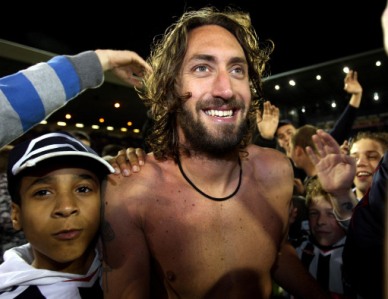 Transfer news from the Premier League is out and according Baggies boss Roberto Di Matteo, Fulham are closing in on the signing of West Brom skipper Jonathan Greening.

The negotiations between the clubs prompted Di Matteo to opt against playing the 30-year-old midfielder in last night’s 3-2 win at Peterborough and it is also believed that Greening handed in a transfer request after a £4million offer from Fulham was rejected last month.

Di Matteo told the club’s official website that “Basically the two clubs are negotiating,” He also said that “His team-mates are fighting for a cause. I didn’t feel it was right for him to be involved last night.”

Di Mateo also said that Greening has been a great professional for the club and that he spoke to him before the game. The manager also added that “there has been a lot going on for him in the last five or six weeks but, once again, I have to emphasise he’s been very good for us.”

Di Matteo ended by saying that “He’s been a true professional and it was my decision to pull him out last night.


Jens Lehmann Wants To Retire At The End Of The Season