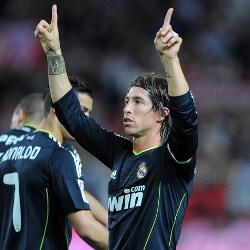 It has been revealed that Jose Mourinho is keen to set up a swap involving Sergio Ramos for Inter Milan fullback Douglas Maicon.

It is said that the Real Madrid boss is eager to again work with the Brazilian fullback and is willing to sacrifice Ramos to make the move happen.

Ramos is reportedly considering his future at Real and is demanding a major pay-rise to stay in Madrid.

The Special One hopes to take advantage of the situation by offering the Spain international to Inter in a swap for Maicon.

Much may depend on Inter’s next coach.