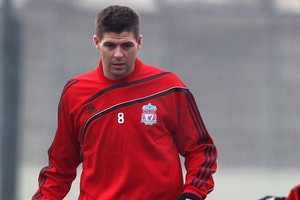 More transfer news are out and it has now been reported that Liverpool captain Steven Gerrard remains on Inter Milan boss Jose Mourinho’s summer shopping list.

It has been reported that the Special One has long been an admirer of Liverpool star Gerrard and almost pulled off his signing while in charge of Chelsea.

It has been reported that Mourinho has been monitoring Liverpool’s stuttering season and is now confident enough to tell president Massimo Moratti to make the midfielder a priority for an end-of-season spending spree.

Despite Liverpool’s insistence that Gerrard is not for sale, Mourinho believes there is a chance of pulling off the coup if they fail to qualify for the Champions League for next season.

Serie A leaders Inter are vulnerable in midfield, where 36-year-old Javier Zanetti is past his best, while Thiago Motta and Sulley Muntari lack flair.