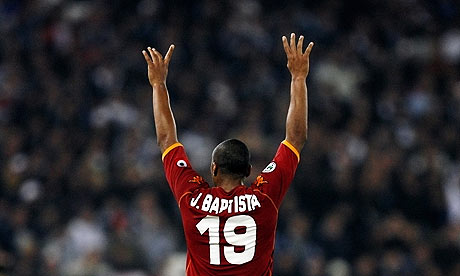 Julio Baptista’s agent has denied rumours that his client is set to leave Italian club AS Roma for Internazionale or West Ham United.

The Brazilian attacking midfielder also known as “The Beast” has been linked with the Serie A champions and the East London club since an impressive season in Italy’s capital raised his stock after losing his way at Real Madrid.

But his agent, Herminio Menendez dismissed the speculation and said the Brazilian will be staying in Rome. He said that at this moment in time, Julio Baptista will 100 per cent stay with AS Roma and that there is a lot of talk about nothing.

He also said that there are no negotiations surrounding Julio Baptista and that everyone should expect him to remain with the Giallorosso.

He also added that he has got no news about Julio as he has not spoken to anyone and that he doesn’t understand why so much is being discussed about Julio leaving Roma.

He also ended by saying that he has not heard from nobody, not even Inter Milan.