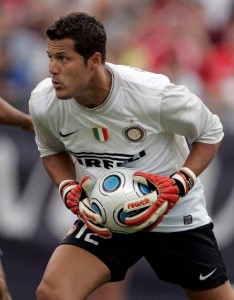 Inter Milan goalkeeper Julio Cesar has strongly denied speculation that he is set for talks with Premier League champions Manchester United over a move to England.

Julio Cesar is widely regarded as one of the world’s best goalkeepers and and is seen as an ideal replacement for Dutch keeper Edwin Van Der Sar.

It is also said that Manchester United will do their utmost to prise him away from the San Siro in January following a number of poor performances from Ben Foster.

The Brazil international’s wife revealed recently that a “big club” have made enquiries regarding the availability of Julio Cesar. The player then dismissed her comments saying that he it is not true and that he has a contract with Inter Milan.

Meanwhile, Inter Milan have also rubbished the reports and technical director Marco Branca revealed that the club is working on a new deal for the 30-year-old whose contract runs to 2012.

Branca said that Inter Milan are already working on a solution and that the player’s contract will be sorted out. He also said that there are no problems and that the discussions are continuing in a calm way.

Julio Cesar’s agent, Josias Cardoso, said that Cesar is confident of putting an end to speculation shortly by agreeing a new deal with the Serie A club.

He added that Manchester United showed their interest for Julio Cesar but until now have not made an official offer.

He also said that at the moment he are talking with Inter Milan to renew Cesar’s contract, but have not yet arrived at an agreement.

He also said that he hopes to succeed before the end of the month and that is his aim.


Welcome To The New TFM