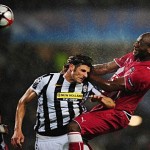 Juventus were denied a Champions League victory in controversial circumstances at the Stadio Olimpico as Bordeaux came away with a 1-1 draw.

The Italians had let through Vincenzo Iaquinta after superb work by Fabio Cannavaro, but Jaroslav Plasil popped up 15 minutes from time to equalise from an offside position.

Bordeaux’s Czech midfielder arrived at the back post to stab home from two yards, but replays showed he was goalside of the last defender when Yoann Gourcuff’s free kick was nodded on at the near post.

Juventus went into Tuesday’s encounter with crippling problems up front, where Brazilian playmaker Diego and talisman Alessandro Del Piero missed out with thigh injuries, and the duo’s absence was tangible in the first half.