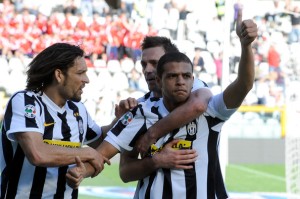 Juve’s European ambitions had suffered two major setbacks after away defeats at Sampdoria and Napoli in the past seven days and it took the creative class of veteran striker Alessandro Del Piero to get them back to winning ways.

The 35-year-old fired Juve ahead with a wonderful 30-yard free-kick on the half-hour and while Nicola Amoruso equalised before the break, it was Del Piero’s pin-point cross that set up Felipe Melo to deliver the three points to the Turin giants.

Juve’s win moves them up to sixth and in possession of the final Europa League place, with Sampdoria falling behind them after they could only draw 1-1 at home to Cagliari.