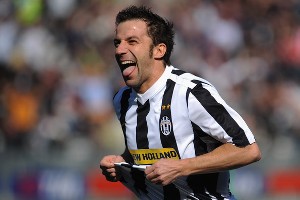 Siena launched a stunning second-half fightback to recover from 3-0 down and earn a draw as Juventus’ disappointing campaign continued at Stadio Olimpico.

Three goals in the opening 10 minutes from Alessandro Del Piero (2) and Antonio Candreva looked to have secured the points for Alberto Zaccheroni’s fifth-placed side, who had entered the match on the back of three wins from their last four games.

But former Middlesbrough striker Massimo Maccarone got a goal back for the basement battlers just before the interval before two goals from Abdel Ghezzal, the second from the spot, sealed the most unlikely of comebacks.

The result will boost Siena’s hopes of avoiding the drop as it means they are four points adrift of safety having been unbeaten in five Serie A matches.