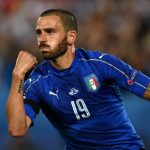 Reports have emerged claiming that Juventus are preparing to sell Leonardo Bonucci this summer.

The Daily Express says Manchester City are said to be keen on landing centre-back Bonucci, with reports in Italy claiming the big-money bid was launched last week.

Juve want to retain their star defender but are realistic about those chances, with City prepared to double his wages.

And Gazzetta dello Sport reports Juve are lining up a move for Bayern Munich’s Medhi Benatia as a replacement for the Italy international.

That would more than double the Italy international’s £3.2m-a-year deal he currently earns in Serie A.