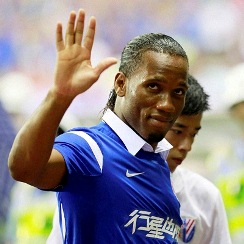 It has been revealed that Juventus are not ready to give up on Shanghai Shenhua striker Didier Drogba.

Tuttosport revealed that the proposal made last Friday for the 34-year-old will be renewed in January.

It was reported over the last few days that two different bids were made for the Shanghai Shenhua star, offering a two-year contract worth €5m per season.