Chelsea midfielder Oscar is not preparing to leave the Blues anytime soon. 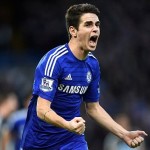 The Brazilian international midfielder is a strong target for Italian champions Juventus but according to Sky Sports, there have been no talks between the two clubs.

Reports earlier this week suggested that Chelsea had turned down an £18million offer from the Bianconeri for Oscar, 23, but it has since been revealed that the respective champions of England and Italy have not been in contact.