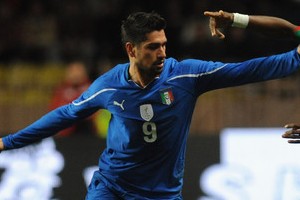 Juventus goalkeeper Gigi Buffon is being linked with a swap move to AC Milan.

Borriello has also attracted interest from Manchester United, which has been given short shrift by Rossoneri vice-president Adriano Galliani.

However, the prospect of signing Buffon in exchange for Borriello would force Galliani into a rethink, particularly with their goalkeeping problems still to be settled.