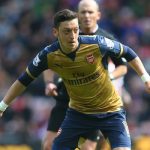 Reports have emerged claiming that Juventus are to test Arsenal’s resolve with a bid for Mesut Ozil.

The Serie A club have reportedly sounded out his interest in leaving the Emirates, although reports in England claim Ozil could be on the cusp of becoming Arsenal’s highest paid player.