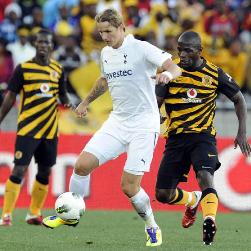 Tottenham Hotspur got their pre-season campaign off to a stuttering start with a 1-0 defeat against South Africa’s Kaizer Chiefs at the Peter Mokaba Stadium in Polokwane.

Spurs were twice denied by top-drawer saves from keeper Itumeleng Khune, the second of which came in the 90th minute and sparked the counter-attack from which George Lebese scored the winner for the Johannesburg side to send the home crowd away happy.

Tottenham manager Harry Redknapp flies in to South Africa later this weekend, and he will have the chance to put things right against Orlando Pirates on Tuesday in Spurs’ second match of the triangular Vodacom Challenge tournament.