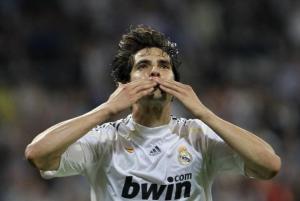 Kaka told reporters that he is only disappointed because Pato did well tonight against his team as he is a great striker and it is unfair to put so much pressure on his shoulders. He added that Pato will soon show what he can do.

This was the first time Kaka was facing his former teammates and was on the losing side as Real Madrid fell 3-2 at home.

He added that after six years at Milan he know that they always comes out in the decisive moments of the Champions League.

He added that Milan has the grit and determination but also said that Milan manager Leonardo surprised everyone with the way he fielded a very attacking and aggressive side.

Kaka also said that it was a game with many emotions facing his former teammates and old club.

Kaka said that Madrid expected a victory to relax in the group, but did not manage to do it and Kaka hopes that Madrid can soon get back on track to end the group phase positively.

He also added that what Madrid is missing at the moment is a precise identity and way of moving together as a unit. Kaka added that it is not easy to form a squad from a group of talented players, but Real Madrid are working on it.