Kaka : I Don’t Have A Problem With Coach Manuel Pellegrini 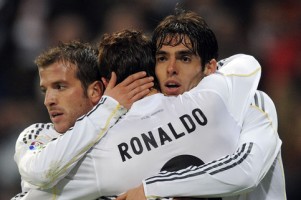 Kaka insists he is happy playing for his Real Madrid coach Manuel Pellegrini.

Pellegrini hooked Kaka in the second-half of their Champions League setback against Lyon last week with the Brazilian’s camp highly critical of the coach on Twitter.

But the midfielder says: “He is always very good with me, I’ve never had a problem with any of my coaches. With Pellegrini, I appreciate the way he’s treated me and helped me. He is a person who has given me much support.”

On the Twitter rant from his spokesman Diogo Kotschko, Kaka added: “It’s his opinion and I have told him not to share it. I spoke with Diogo. I have spoken to the club to clarify the situation.”

Manchester City To Launch £40 million Bid For Higuain And Gago