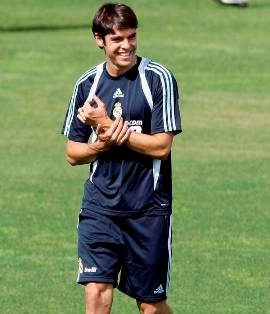 Real Madrid’s Brazilian midfielder Kaka has said that the Premier League’s Big Four clubs are not the force they were used to be.

The Brazilian international midfielder reckons that the loss of Cristiano Ronaldo and Carlos Tevez has weakened Manchester United and he rates Chelsea as Real’s biggest threat as the Spanish giants hunt their 10th European crown.

He also said that the English teams have lost some important players while the top teams in Spain have kept hold of the top players and added some of the best in Europe.

Kaka also said that with the team Real Madrid now has, anything but becoming European champions is not good enough.

He also said that Manchester United have lost some great players and are weaker than last season but believes that Chelsea will be a threat.

However, Kaka said that Chelsea do not play the most exciting football in Europe but play one of the most effective forms and as things stand with their current players and manager, Chelsea are the team to be most feared from England.

Kaka also revealed that he would love to watch Arsenal and it would be nice to see that style of football rewarded with a trophy.

Kaka also said that Liverpool are never an easy team to play and that he had some great battles with them when he was at AC Milan and they are a team which is suited to European football.