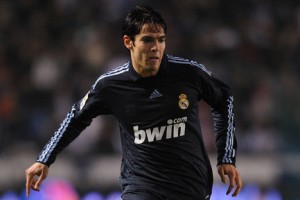 Real Madrid were scrambling yesterday over revelations that Kaka shot a commercial this week while reported to be injured.

It was reported in Spain that while Real coach Manuel Pellegrini has declared Kaka was struggling with injury and would not appear at training until next week, the Brazilian shot a commercial.

Observers were stunned to see Kaka running freely and at pace, despite official word of a leg injury.

The Brazilian international was missing for last night’s 4-2 win over Getafe.