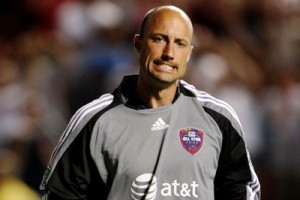 Kasey Keller is hoping he can secure a further year on his Seattle Sounders contract.

The 40-year old former Tottenham and Fulham stopper wants his deal to extend into 2011 and says there are ongoing discussions with the club in regards to holding onto the veteran before MLS expands to an 18-team competition when Vancouver and Portland enter the league.

Keller told reporters that the parties have talked about it and it is about extending his contract one more year.

The goalkeeper also said that the parties are trying to get the CBA sorted out right now and make sure that things goes off without a hitch this year, and then there should have plenty of time to talk about the contract through the season.

He then said that the way he feels right now about the club and himself, he would be real surprised if he was not playing in 2011.


Gianfranco Zola : 37 Points Should Be Enough For Safety