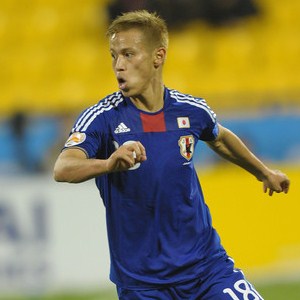 Japan striker Keisuke Honda has been named the Asian Cup’s Most Valuable Player of the tournament.

The CSKA Moscow star received the award after his side had been crowned Asian champions for the fourth time following their 1-0 extra-time win over Australia in the final.

Honda admitted it was a great honour to win the Asian Cup but said he felt the team could continue to improve even after the victory.

“It is great time for me. I am satisfied to become champion,” Honda told Goal.com.

“It was a very difficult game. Of course, I expected that in the end. I expected penalties.

“Everybody likes to attack and we try to keep the ball. I think we need to improve as we [are] never satisfied.”

European clubs will sure to be looking at Honda more closely now after he has previously been linked with the likes of Liverpool, AC Milan and Arsenal but his agent, Kees Ploegsma, says the star man will not be going anywhere until at least the European summer.

“He will stay in Moscow,” Ploegsma told Sport.co.uk.
“We have no contacts within any club at this moment in time and after next week Honda will be going to a training camp in Turkey with CSKA. In the summer, it is something different, we will see, but it is far away now.

“He is staying in January and returning to CSKA with pleasure. In the future we will see.”