ShareTweet
Kenny Dalglish signed a three-year contract as Liverpool manager on Thursday after helping the team recover from a dreadful start to the season and move to the brink of European qualification, with Steve Clarke continuing in his role as assistant on a similar contract.

The former Scotland striker returned for a second spell in charge of Liverpool in January when he replaced the fired Roy Hodgson on a six-month deal.

Dalglish has since overseen a dramatic improvement in results, lifting the club from a perilous position near the foot of the Premier League table to fifth place and a win away from qualification for next season’s Europa League.

“I said when I took the job on in January that I was just happy to help the club out for the remainder of the season … now the owners have decided in their wisdom that they want me to stay a little longer and it’s fantastic news,” Dalglish said.

The permanent appointment of Dalglish, who won eight league titles as a player and a coach from 1977 to ’90 to establish himself as a club legend, was hardly in doubt after the team’s remarkable turnaround in form.

Taking over a team lacking in confidence and just four points above the relegation zone, Liverpool has lost just three times in the league in the last four months and catapulted up to fifth. A victory over sixth-place Tottenham at Anfield on Sunday will secure a place in the Europa League.

Who would bet via online sportsbook that Dalglish completely turn the club around and next season they would win the Premier League and gain parity with Man Utd on 19 titles?

Arsenal, Liverpool Set To Do Battle For Arda Turan 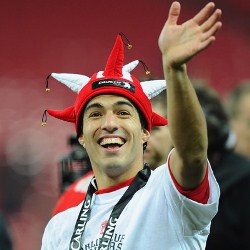 Suarez will leave Liverpool for a Champions League Club