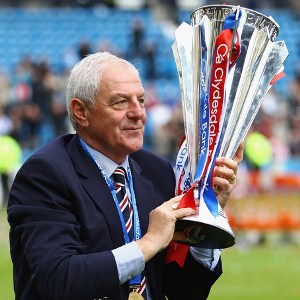 Kyle Lafferty netted a hat-trick as Rangers were crowned SPL champions for the third straight year after an emphatic 5-1 victory over Kilmarnock.

The title race was still in the balance heading into the final day of the season, but Rangers were in control of their own fate, and they took matters firmly into their own hands with three goals in the opening seven minutes to all but seal the title.

Lafferty got the ball rolling in the opening minute with a neat lob over Kilmarnock keeper Cammy Bell before his strike partner Steven Naismith got in on the act. Lafferty scored his second after a well-worked move by Nikica Jelavic to put Rangers in cruise control.

Jelavic made it four shortly after half-time before Lafferty completed his hat-trick before the hour-mark. James Dayton’s deflected free-kick restored some pride for a wounded Kilmarnock, but it was merely consolation as Walter Smith’s side cruised to a third SPL title in as many years.