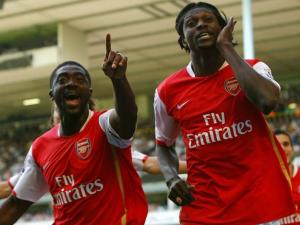 It is settled and Arsenal defender Kolo Toure has signed a four-year deal with Manchester City and the Ivory Coast international,now aged 28, completed his £17million move from Arsenal after passing a medical and agreeing personal terms.

Now, Toure will link up once again with former Gunners team-mate Emmanuel Adebayor at Eastlands and City boss Mark Hughes has said that he is delighted to welcome Kolo Toure to Manchester City.

Hughes added that it is no secret that City have been looking to strengthen its defence and in Kolo the club feel that it has recruited a world-class player as he brings a wealth of Premier League experience from his seven seasons with Arsenal.

He also said that Kolo Toure has been a central figure in a very strong Arsenal team for many years and Hughes admitted that he has been an admirer of Toure for a long time. Hughes added that Toure is strong, quick, reads the game well and will be an influential figure in the dressing room.

City have also confirmed defender Nedum Onuoha, 22, has agreed a new five-year contract and the England Under-21 defender said that Manchester City is a great place for any young player to be and added that hopefully it will be the start of another good five years for him and for the club. He also added that this is the season when players will be looking right towards the top of the table.

He also said that nobody knows how far the club can go and if looked back five years ago, no one would have expected the club to be in the position it is in now.

He ended by saying that the players now feel that anything is possible.