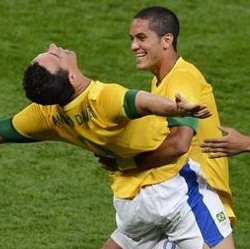 Brazil’s dream of winning an elusive Olympic football gold came a step closer when they thrashed South Korea 3-0 in the semi-finals at Old Trafford.

The victory sets up a title decider against Mexico at Wembley Stadium on Saturday after the Mexicans beat Japan 3-1 in the earlier last four clash.

Brazil, whose obsession with winning gold is matched by few other countries, won with second-half goals from forward Leandro Damiao, now tournament top scorer with six, after a 38th minute opener from Romulo in front of a 69,389 crowd.