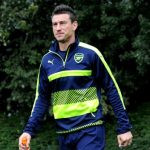 It has been revealed that Arsenal’s Arsene Wenger says Laurent Koscielny will be fine for this week’s Champions League clash with PSG.

The French defender received a heavy knock to the face late in the Gunners’ last-gasp win over Southampton on Saturday, prompting Wenger to suggest that there was doubt over his availability for Tuesday night.

However, stand-in skipper Koscielny trained without hindrance at London Colney on Monday and is set to play at Parc des Princes in Arsenal’s Group A opener against the French champions.

“He’s all right – he had a big knock on his face but he recovered quite well,” Wenger said.

“I was concerned after the game that he wouldn’t be available tomorrow, but he is all right.”

Koscielny will partner summer signing Shkodran Mustafi in the centre of defence for Arsenal.