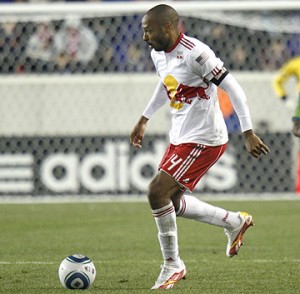 Thierry Henry and Landon Donovan traded first- half goals as Red Bull New York and the Los Angeles Galaxy finished in a 1-1 draw at The Home Depot Center on Saturday.
The first half was wide open as New York (4-1-3) took an early lead through Henry, who raced into the penalty area to collect a diagonal ball from Dane Richards, round goalkeeper Donovan Ricketts and roll the ball into the net.
Galaxy striker Juan Pablo Angel was facing his former team for the first time and he thought he had a goal in the 25th minute, but it was called back for offsides.
However, the hosts equalized in the 41st minute when David Beckham’s corner kick was headed home from eight yards by Donovan.
The U.S. international then missed a great chance a few minutes later when Beckham’s ball over the top allowed Donovan to beat Ricketts to the ball outside the penalty area. But Donovan’s shot didn’t have enough behind it, allowing New York defender Tim Ream to recover in time to clear the ball off the goal line.