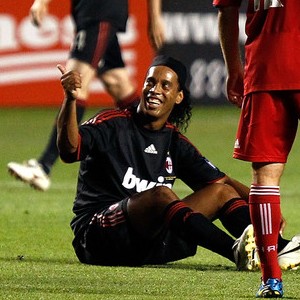 MLS giants the Los Angeles Galaxy are reportedly offering Ronaldinho a four-year contract to move to the ‘States.

According to Gazzetta dello Sport, AC Milan are ready to cut loose the former World Player of the Year and are already searching for a replacement.

The former Brazilian international also has offers from Flamengo and Palmeiras in Brazil, but Galaxy’s offer is the richest – and also the longest – on the table.

AC Milan on their part have already signalled that they are ready to do business by contacting Manchester City about Robinho as a direct replacement for Ronie.