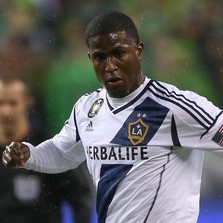 Reports are out claiming that the Colorado Rapids have acquired forward Edson Buddle, a World Cup veteran with 93 career MLS goals, in a trade with the LA Galaxy.

The 31 year old USA international striker has been in Major League Soccer since 2001, playing 250 matches with four teams, and appeared in two matches for the United States at the 2010 FIFA World Cup.

In exchange for the forward, the Rapids sent allocation money and the team’s first round 2013 MLS Supplemental Draft pick to the Galaxy.

“Edson is an explosive, dynamic forward who is among the top scorers in MLS history,” said Rapids Technical Director Paul Bravo.

“He’s a strong presence up top, with both size and skill, and he has great experience in MLS, Germany, and the U.S. National Team. We’re happy to welcome him to the Rapids.”